The reality of Ultra HD was the big story at NAB 2015 in Las Vegas.

Together with a team of technology partners, SES led a successful first-of-its-kind Live Ultra HD broadcast demonstration at NAB that has commanded interest among even the largest cable operators and opened doors to accelerated deployment plans.

“Our Ultra HD demonstration is a milestone event that changes everything,” noted Steve Corda, SES’s Vice President of Business Development in North America who spearheaded the historic demo. “This is the first end-to-end, camera-to-screen Ultra HD ecosystem capable of delivering live and linear Ultra HD content to a cable system,” Corda said at the SES booth. “We had to go through some hoops to realise this Ultra HD demo. In all, it took us about 18 months from concept to the delivery of today’s Ultra HD broadcast.”

SES produced a compelling programming lineup for the Ultra HD broadcast: live NAB updates, live performances (like a hula hoop dancer) and celebrity interviews, including a chat with Rick Harrison of the hit reality TV show Pawn Stars, as well as pre-produced Ultra HD feature coverage of drag racing at the Las Vegas Motor Speedway, the Las Vegas strip at night, and nearby landmark Hoover Dam.

It took a team of technology partners to pull off this television first. Live Ultra HD NAB coverage originated from the SES NAB studio located at the front door of the Las Vegas Convention Centre. The live Ultra HD signal was processed using Harmonic Ultra HD encoders, uplinked, using a PACSAT SNG truck, to the SES-1 satellite and delivered to the SES teleport in Woodbine, Maryland. Live and stored content was combined and transmitted over the AMC-1 satellite over the new Digital C+ DVB-S2x platform to a 4.5m Superior Satellite Systems antenna in the convention centre parking lot. From there it was transmitted the final 500 feet into the Ultra HD cable TV system and viewed via smart TV apps on Sony and Samsung Ultra HD TVs inside the SES booth on the NAB show floor.

“Our live Ultra HD broadcast signal travelled 90,000 miles over two satellites and through our breakthrough, end-to-end Ultra HD ecosystem,” noted Corda. “As a result, we’re a million miles ahead of where we were comparatively speaking with the introduction of Live HD into the home." 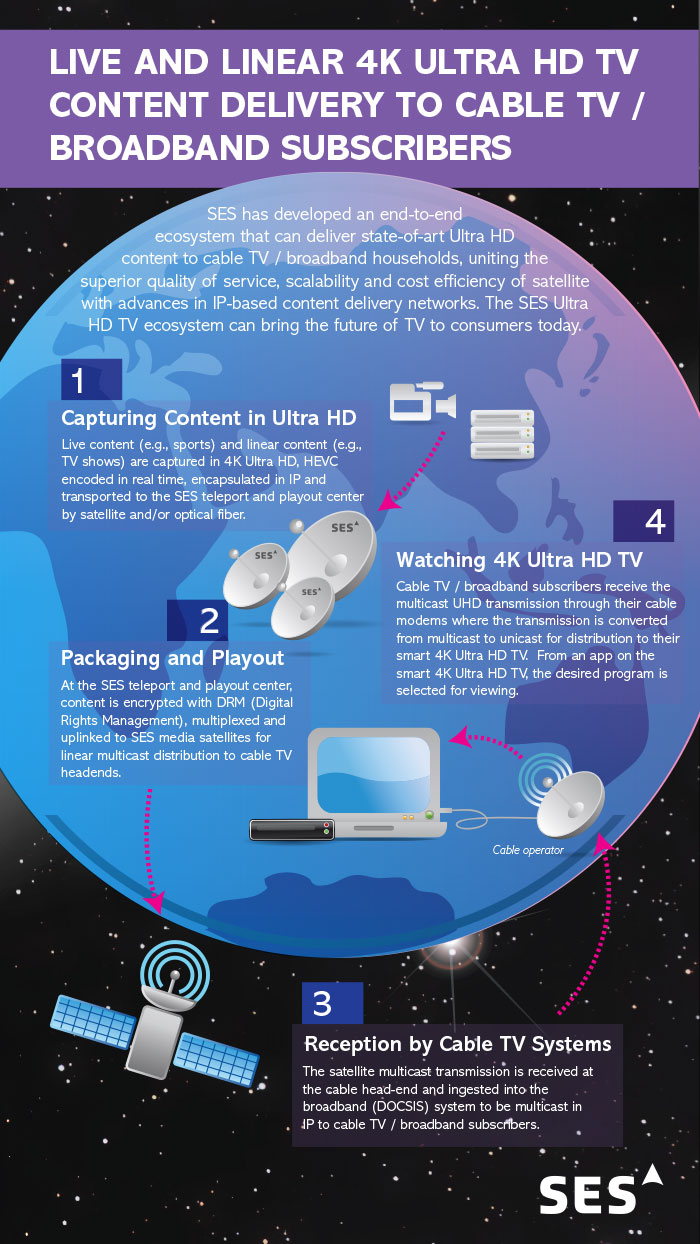 SES engineers spent 18 months developing the solution, doing the heavy lifting so cable operators, content providers and sports leagues don’t have to. They developed the solution by combining satellite’s multicasting capability with DOCSIS 3.0, the latest IP broadband system already deployed by most cable operators today. “We’ve written a smart TV app that allows the viewer to select either the live or non-linear Ultra HD environment,” Corda explained. “The beauty is there’s no set top box required. We leveraged consumer electronics innovations in smart TVs, including built-in decoders, and we use the app environment,” he said, noting the solution was demonstrated on both Sony and Samsung 65-inch flat screens.

IP broadband and digital TV share the same coaxial cable going into cable homes. In fact, they utilize the same channel structure and modulation scheme. The cable operator then selects either an MPEG-2 transport stream for digital TV or IP data on each channel. The coax is split in the home, with one going to the cable modem, where the IP stream is processed and fed into a WiFi router, then distributed throughout the home to IP devices such as PCs, printers, smart phones and smart TVs. The traditional digital TV model has the coax going into the digital TV set top box, which processes the signal and sends it out the HDMI port to the TV.

IP broadband and digital TV use the same physical infrastructure to reach the cable home. The milestone SES solution uses the IP component to transmit the TV offering.

“This allows us to work in the smart TV environment, but it’s not over-the-top television. It’s a far better, more elegant experience,” Corda said. “We utilize dedicated bandwidth rather than contended bandwidth like the OTT players. Ours is a scalable, fully-managed solution that’s ready to meet the looming demand for Ultra HD without the buffering problems when the content freezes on the screen. Because this live and linear Ultra HD broadcast is running over the broadband infrastructure, it’s a big departure from traditional digital TV. It’s a game changer.”

Cable operators and content producers of all sizes gathered to see the first-of-its-kind solution at the INTX Expo. Several Tier 2 to Tier 4 cable operations are signing on for trials of SES’ new Live and Linear Ultra HD solution. “We expect to make several announcements about upcoming cable trials in the next few weeks,” noted Corda. “These important pilot programmes should begin this summer,” Corda added.

SES is riding a wave of momentum into the pilot phase. Corda told a group of cable operators in the SES INTX booth, “This demonstration clearly shows that we have a solution that can put live and linear Ultra HD in homes far faster than the four to five years it took HD to reach cable systems.”