The Broadcast Evolution of the Olympics

Blog 2 min read
The Broadcast Evolution of the Olympics
Share

A week has passed since we witnessed the Rio Olympics’ opening ceremony and gone on to watch our favourite athletes’ compete on the fields – either in person or on TV – in real time. Being able to watch live matches on TV today may seem like a daily affair but the first live transmission of the Olympics Games was made possible in 1948, where matches held in London were broadcast to people's living rooms via terrestrial technology, and only on British TV.

For the games to be broadcast beyond borders, another technology was needed. This breakthrough came in 1964, when the first geostationary satellite was launched - right on time to offer live coverage of the Olympics in Tokyo to other parts of the world. With a single satellite capable of covering one third of the globe, this new technology enabled broadcasters to transmit live sporting events reliably to an international audience worldwide. The transmissions reached the five continents in the 1970’s, bringing the sports magic to the people’s screens across the world. 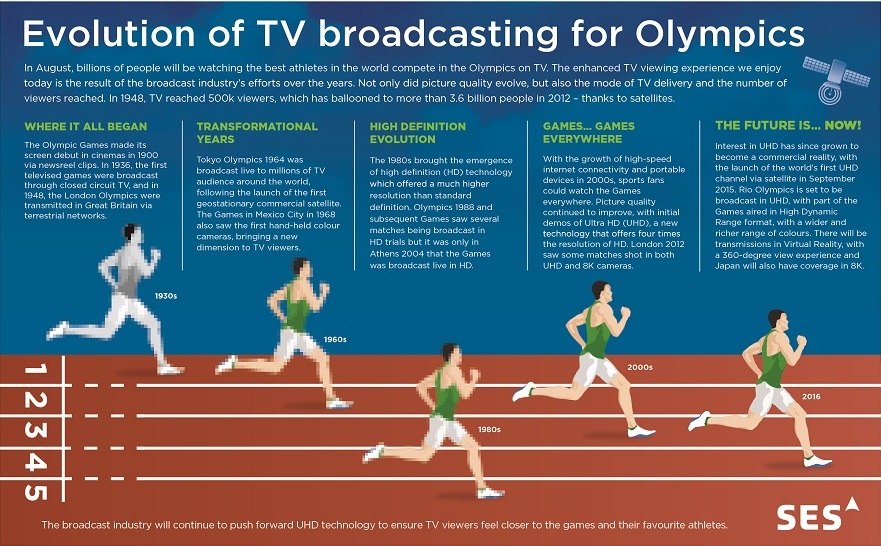 The audience grew exponentially through the years: while in 1948 TV reached an estimated audience of 500k viewers, this has since ballooned into more than 3,6 billion people in 2012, with more than 100k hours of content broadcast around the globe with the help of world-leading satellite operators.

However the audience was not the only thing to evolve through the years. The picture quality brought to the TV screens has also tremendously improved, bringing quantum leaps in the viewing experience. From transmitting the Games in black and white images to colour images in SD in 1968 to HD in the 1980s, satellite has played a huge role in providing bandwidth that made all this possible.

In the 2010s, picture quality continued to improve, with the first prototypes and demonstrations of Ultra HD 4K, a new technology offering a resolution four times higher than HD. In London 2012, broadcasters  tested the 4K technology and went even further with an experimentation of the 8K cameras (two times higher resolution than 4K).

Since then, the interest in Ultra HD has grown, becoming a commercial reality in September 2015, with the launch of world’s first Ultra HD channel, Fashion One 4K, on SES’s satellites. This was the first of many, with SES carrying 26 Ultra HD commercial channels as of Q2 2016.

Engulfed in the Ultra HD buzz is the Rio Olympics which are broadcast in Ultra HD for the first time on commercial channels (as opposed to previous years when these were only tests). And because the industry is constantly working to provide a more immersive viewing experience, it doesn’t stop there. Parts of the Games are being aired in UHD with High Dynamic Range (HDR), producing a wider and richer range of colours, and in Japan, 130 hours of the Games’ coverage are in 8K.

They are also available in Virtual Reality, offering a viewing experience with a 360-degree view. As the hunger for a more mesmerising TV experience intensifies, satellite is set to remain a key infrastructure to transmit live events such as the Olympics in high quality to a large audience. The satellite industry will continue to push new TV technology forward such as HDR, making sure the TV viewers feel closer and closer to the Games and their favourite athletes.