Luxembourg and Paris, 12 July 2018. – Leading global satellite operators Intelsat S.A. (NYSE: I), SES (Euronext Paris: SESG) and Eutelsat (Euronext Paris: ETL) announced today that they are aligned on a market-based proposal for the future use of the lower C-band spectrum in the U.S. Eutelsat has agreed to join the breakthrough proposal initiated by Intelsat, Intel and SES. 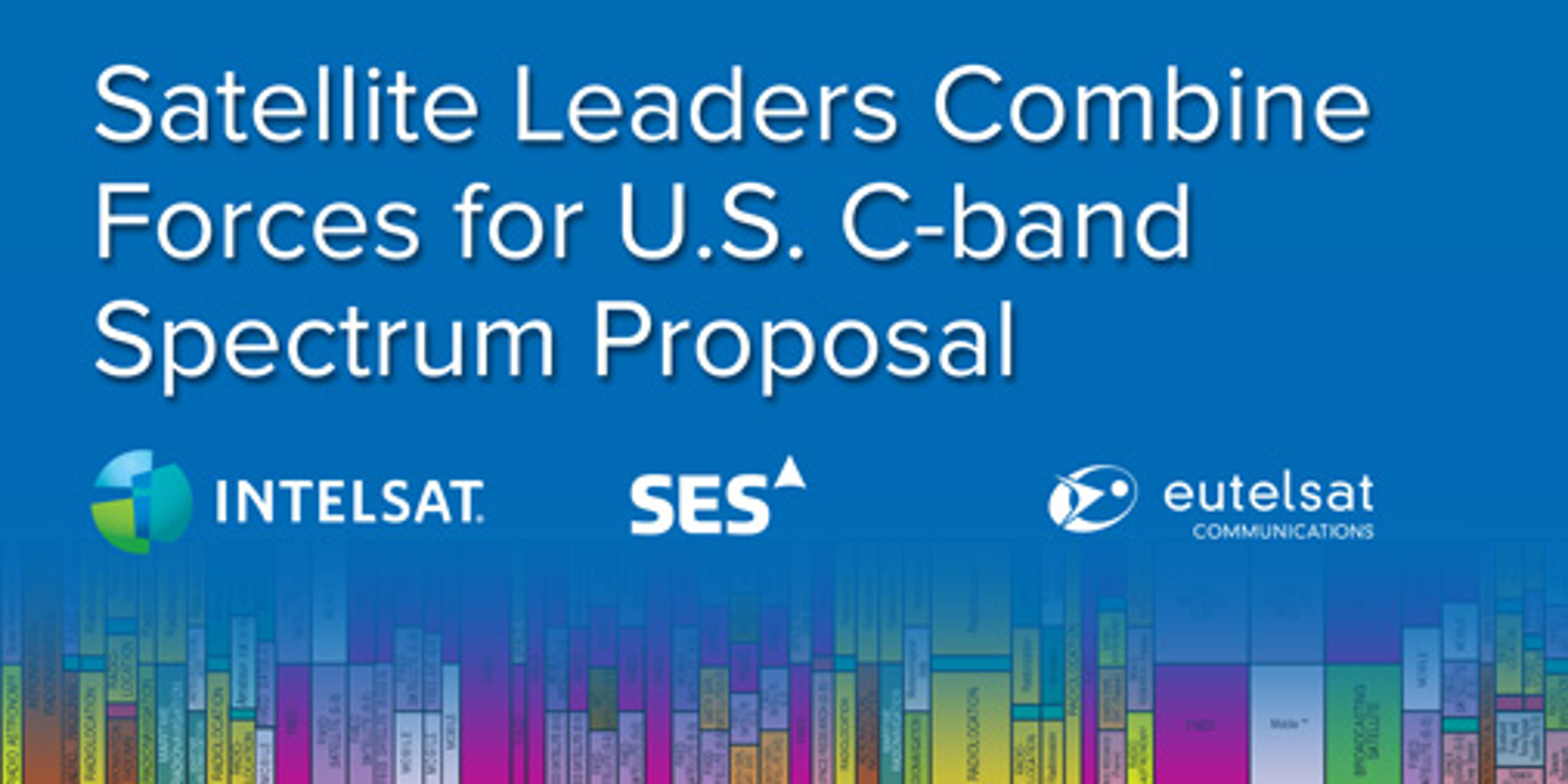 The market-based proposal was developed in response to a proceeding initiated by the U.S. Federal Communications Commission (FCC). The proposal reflects the unique U.S. telecommunications environment and aims to protect the quality and reliability of the extensive services provided by satellite operators in the C-band spectrum to U.S. broadcasters, media, and data companies. The proposal establishes a commercial and technical framework that would enable terrestrial mobile operators to quickly access spectrum in the 3,700 to 4,200 MHz frequency band in the U.S., speeding the deployment of next-generation 5G services.

C-band spectrum plays an essential role in the U.S. broadcasting ecosystem, delivering seamless distribution of video and audio programming to more than 100 million U.S. households, and reliably providing critical data connectivity in rural areas and emergency situations, as well as services delivered to the U.S. government.

The proposal specifies the use of a consortium, which is open to all satellite operators delivering services in the C-band downlink frequencies in any part of the lower 48 United States. The consortium will oversee the governance of the initiative, define and implement the methodology for spectrum clearance, and serve as the sole interface for market-based transactions with parties interested in deploying terrestrial mobile services in specific portions of the C-band.

With Eutelsat joining the proposal, the three satellite operators will continue to work with customers, other stakeholders, and the FCC on the market-based proposal. The next phase of this effort will begin with the FCC’s planned adoption of a Notice of Proposed Rulemaking on Thursday, July 12. Intelsat, SES, and Eutelsat together represent a very substantial majority of the relevant satellite C-band spectrum in use in the U.S.

“We are pleased to be joining this proposal which aims to create fair conditions for the shared use of C-band with mobile operators in the U.S. while protecting the quality of services provided to our customers over the long term,” said Rodolphe Belmer, CEO of Eutelsat. “By joining this collaborative process, we will be able to advance our interests and those of our clients and contribute to the momentum of the initiative.”

In a joint statement, Intelsat CEO Stephen Spengler and SES President and CEO Steve Collar said: “We are pleased to have Eutelsat join Intelsat and SES in this endeavor, demonstrating that the industry is able to unite, collaborate and fully implement our market-driven proposal. Our solution is the only one which will maintain the high quality of the hundreds of incumbent services operating in the C-band today, protect the significant investments in space and ground infrastructure delivering these crucial services while also supporting the U.S. goal of accelerating the 5G era.”

SES is the world’s leading satellite operator with over 70 satellites in two different orbits, Geostationary Orbit (GEO) and Medium Earth Orbit (MEO). It provides a diverse range of customers with global video distribution and data connectivity services through two business units: SES Video and SES Networks. SES Video reaches over 351 million TV homes, through Direct-to-Home (DTH) platforms and cable, terrestrial, and IPTV networks globally. The SES Video portfolio includes MX1, a leading media service provider offering a full suite of innovative services for both linear and digital distribution, and the ASTRA satellite system, which has the largest DTH television reach in Europe. SES Networks provides global managed data services, connecting people in a variety of sectors including telecommunications, maritime, aeronautical, and energy, as well as governments and institutions across the world. The SES Networks portfolio includes GovSat, a 50/50 public-private partnership between SES and the Luxembourg government, and O3b, the only non-geostationary system delivering fibre-like broadband services today. Further information is available at: www.ses.com

Intelsat S.A. (NYSE: I) operates the world’s first Globalized Network, delivering high-quality, cost-effective video and broadband services anywhere in the world. Intelsat’s Globalized Network combines the world’s largest satellite backbone with terrestrial infrastructure, managed services and an open, interoperable architecture to enable customers to drive revenue and reach through a new generation of network services. Thousands of organizations serving billions of people worldwide rely on Intelsat to provide ubiquitous broadband connectivity, multi-format video broadcasting, secure satellite communications and seamless mobility services. The end result is an entirely new world, one that allows us to envision the impossible, connect without boundaries and transform the ways in which we live. For more information, visit www.intelsat.com

Founded in 1977, Eutelsat Communications is one of the world's leading satellite operators. With a global fleet of satellites and associated ground infrastructure, Eutelsat enables clients across Video, Data, Government, Fixed and Mobile Broadband markets to communicate effectively to their customers, irrespective of their location. Over 6,800 television channels operated by leading media groups are broadcast by Eutelsat to one billion viewers equipped for DTH reception or connected to terrestrial networks. Headquartered in Paris, with offices and teleports around the globe, Eutelsat assembles 1,000 men and women from 46 countries who are dedicated to delivering the highest quality of service. Eutelsat Communications is listed on the Euronext Paris Stock Exchange (ticker: ETL). For more about Eutelsat go to www.eutelsat.com