Time is of Essence: SES calls for fast track connectivity solutions in Africa

The 10th European Development Days in Brussels saw hundreds of delegates come together to discuss innovative solutions to the world’s most pressing challenges in the developing countries of Africa. Held in June, the event which focused on “Sustainable Development Goals (SDGs) in Action and Implementation of the 2030 Agenda for Sustainable Development” put forward ideas and experiences shared by the development community that is meant to inspire new partnerships in the coming years.

SES took part in two high-level panels which called for speedier processes to deploy connectivity solutions in Africa, and stressed that private sector engagement in the 2030 Agenda should become a priority for the European Commission if the SDGs are to be achieved. SES also highlighted how public private partnerships (PPPs) in Africa are key to ensuring that business and social development objectives are met.

Christine Leurquin, Vice President of Institutional Relations and Communications at SES, spoke at the EU-Africa Business Forum, where speakers from both the private and public sectors highlighted the importance of impact investing for Africa and PPPs.

Appealing for an end to regulatory fees for private investors, Leurquin called for larger investments from the public sector itself. “If the public sector doesn’t inject the right type of investment into Africa, the SDGs will not be met,” she said. Private investment have already been made in Africa to bridge the digital divide, and what the private sector requires is entrepreneurship, common PPPP (People, Public, Private Partnership) projects to deploy new initiatives.

“Today, time is of essence,” Leurquin continued. “We need to fast track the deployment of connectivity solutions in Africa to slow down the massive migration of young people who don’t believe they have a future at home. We need to create jobs and help them develop their own tools and solutions to the world’s economic challenges.”

Leurquin went on to highlight the current delays, but also the lack of transparency and of opportunities private investors often face when submitting proposals to public authorities in Africa.

“In order to speed up the SDGs and further promote PPPs, public authorities should speed up processes,” she said. “On average, we currently witness a two- to three-year delay between the submission of a proposal by the private sector to the public governments and the signature of a contract. We would hence strongly plead for a substantial investment in measures to develop a business-friendly environment for the private sector by offering more transparent, stable and harmonised regulatory conditions, faster track public funding and the abolishing of two-year waits for contracts.”

Ibrahima Guimba-Saidou, Senior Vice President, Commercial, Africa at SES, took part in the panel entitled “From Words to Actions: Innovative solutions to make the Sustainable Development Goals work by engaging the private sector”. With Africa's population of youths growing rapidly, counting 200 million already, he highlighted the challenge of integrating them into the economy and reaching the SDGs in 2030.

He envisioned a way for SES to contribute to the SDGs by acting as a connectivity accelerator. Today 400 million Africans live outside the user reach of fibre connectivity, and 80% still live without a mobile broadband connection (source: ITU). Satellite technology can connect the unconnected now. SES already has 10 satellites over Africa, deployed SATMED healthcare programmes in Benin, Niger and Sierra Leone, and trains local engineers in precise antenna dishes installation across Africa as part of the Elevate programme. This culminates in an overall investment of almost three billion euros – all of which are aimed to provide broadband connectivity to the unconnected and disconnected communities throughout the continent. However more and faster changes in connecting the local population would be possible if investments in Africa were made easier. He concluded that decisions at international and local levels need to be made faster and more transparent.

Together with speakers such as the Director General of UNIDO (United Nations Industrial Development Organisation) and the Executive Director of UNOPS (United Nations Office for Project Services), Guimba-Saidou discussed ways in which the private and public sectors could cooperate to support local development in Africa in order to reach the SDGs in 2030.

“PPPs are essential to ensure that public funding allows for truly inclusive societies,” he said. “To date the critical lack of public funds allocated for the mass diffusion of connectivity means that sound PPPs have the power to create and accelerate opportunities in the markets in order to fast-track Africa’s development path.” 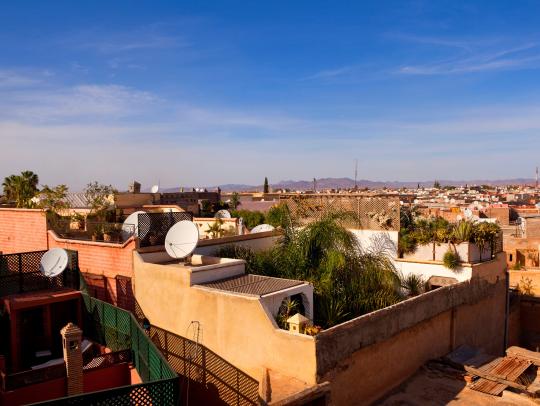