Accelerating the Delivery of Ultra HD

The rate of Ultra HD adoption has been nothing short of phenomenal – with most of the traction gained in 2016 expected to carry through to 2017.

Viewers in North America love a good cinematic experience – not just on the big screen but also at home. This is indicated by their overwhelming demand for Ultra HD, with Ovum predicting that the sales of UHD TV sets will surpass HD+SD in the beginning of 2018.

Globally, the appetite for exceptional viewing quality has been whet by the rise of Ultra HD content in 2016 – beginning with the world’s first Ultra HD channel, Fashion 4K, launched via SES satellites in September 2015 across Europe, North America and Latin America.

By January 2017, the number of Ultra HD channels on board SES has grown to 32 worldwide, making SES the satellite operator with the largest Ultra HD line-up.

The need for synergy platforms

A flipside with the arrival of new technology is the platforms need to be ready to support it: when HD entered the video market, it took four years for the new TV format to be developed and reach the majority of living-rooms.

As the leader in video distribution with the largest HD/UHD line-up worldwide, SES decided to accelerate the roll-out of Ultra HD in North America, pushing the technology forward by focusing on the entire end-to end ecosystem.

It started at the NAB show in 2015, when SES and its team of technology partners made waves as they demonstrated the first-ever delivery of live and linear Ultra HD content to a cable system. In an IP technology breakthrough, the feat was accomplished by combining satellite multicasting capability with traditional digital cable TV delivery as well as with DOCSIS 3.0, the latest IP broadband system already deployed by most cable operators today. The showcase of this scalable, fully-managed solution, signifies readiness for the looming demand for Ultra HD. The first-ever platform trial with Armstrong Cable began just three months later, kick-starting the acceleration of the Ultra HD roll-out.

And if the growing number of operators joining the Ultra HD trials was not exciting enough, the most thrilling part is that some of the participating MVPDs are nearing the historic launch of consumer Ultra HD packages across the country.

With this achievement, the SES team will have turned what started as a demo at NAB into commercial reality for Ultra HD within just two years.

“Just like we were pioneers for HDTV a decade ago or so, we have been laying the groundwork for Ultra HD, and drawing on that previous experience with HD we are able to considerably reduce the leap to the new TV technology,” said Steve Corda, Vice President, Business Development North America, SES. “It is very exciting for us to see the entire value chain coming together; with more operators getting closer to consumer Ultra HD services, we can be sure the adoption rate is going to skyrocket.”

Check out the infographic to see our key milestones 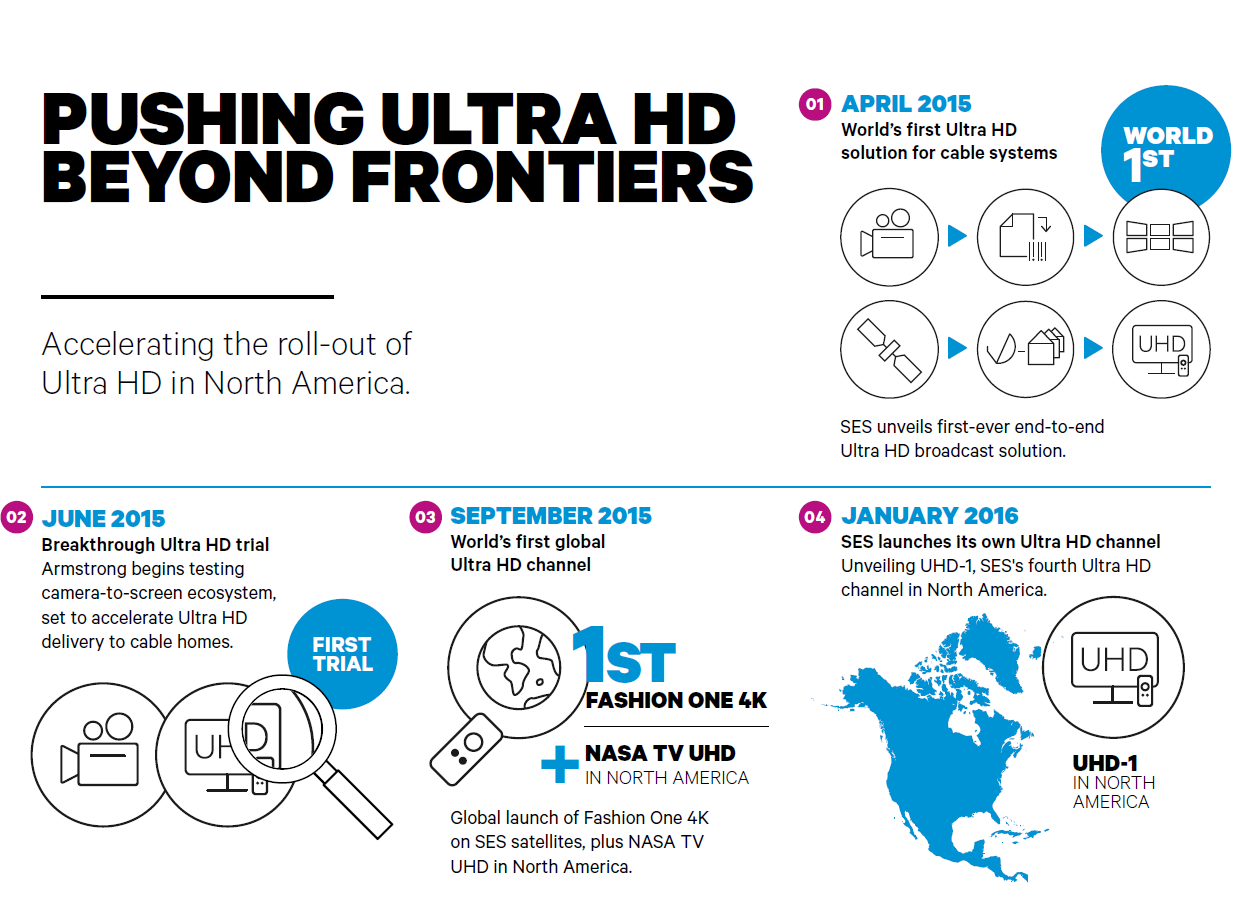