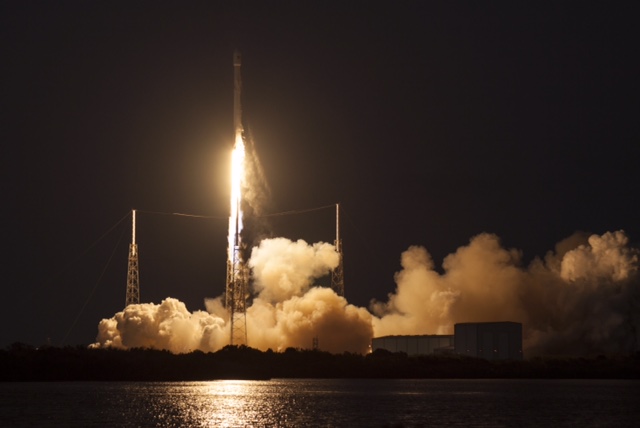 SES-9 uses a chemical bi-propellant thruster to conduct major post-launch manoeuvers, completing its journey to its orbit at 36,000 kilometers above the Equator with an electric propulsion system. The on-orbit maneuvering throughout the 15 year nominal lifetime of the satellite will be done entirely by electric propulsion. SES-9 is planned to commence its services in the third quarter of this year.

SES-9 is SES’s largest satellite to serve the Asia-Pacific region. It weighed 5.3 tonnes at the launch and has 57 high-power Ku-band transponders – equivalent to 81x36 MHz transponders’ It thus provides significant expansion capacity to serve the buoyant and fast-growing video, enterprise, mobility and government sectors across Northeast Asia, South Asia, India, Indonesia and the Philippines. SES-9 will be co-located with another SES satellite, SES-7, at the prime orbital location of 108.2 degrees East, and will replace the NSS-11 spacecraft at that position. SES-9 was built by Boeing Satellite Systems International.

“SES-9 is an important building block in our strategy to grow in dynamic regions and four prime sectors -- video, enterprise, mobility and government,” said Martin Halliwell, Chief Technology Officer of SES. “Co-located with SES-7, the new satellite will reach 22 million TV homes and is designed to deliver high-performing connectivity to homes, enterprises and institutions across Asia. With its dedicated mobility beams, it will help us to capture new opportunities in the buoyant markets for maritime and aeronautical connectivity. The successful launch of SES-9 also takes us an important step further in our excellent relationship with SpaceX as a launch provider of growing importance, and is further proof of SpaceX’s professionalism and impressive performance. I congratulate the SpaceX and SES teams, who together have done an excellent job.”

More information on the launch and the spacecraft:

Further information is available at: www.ses.com