SES, ESA AND OHB KICK OFF DEVELOPMENT OF ALL - ELECTRIC PROPULSION SATELLITE – ELECTRA

LUXEMBOURG, 11 March 2016 - SES S.A. (NYSE Euronext Paris and Luxembourg Stock Exchange: SESG) announced today the signature of contracts, in the presence of Luxembourg’s Deputy Prime Minister and Minister of the Economy Etienne Schneider, for the next phase of the development of a new-generation satellite programme which was launched in 2013. Under the Electra programme name, OHB will be developing a fully electric satellite platform to reduce mass and launch costs. 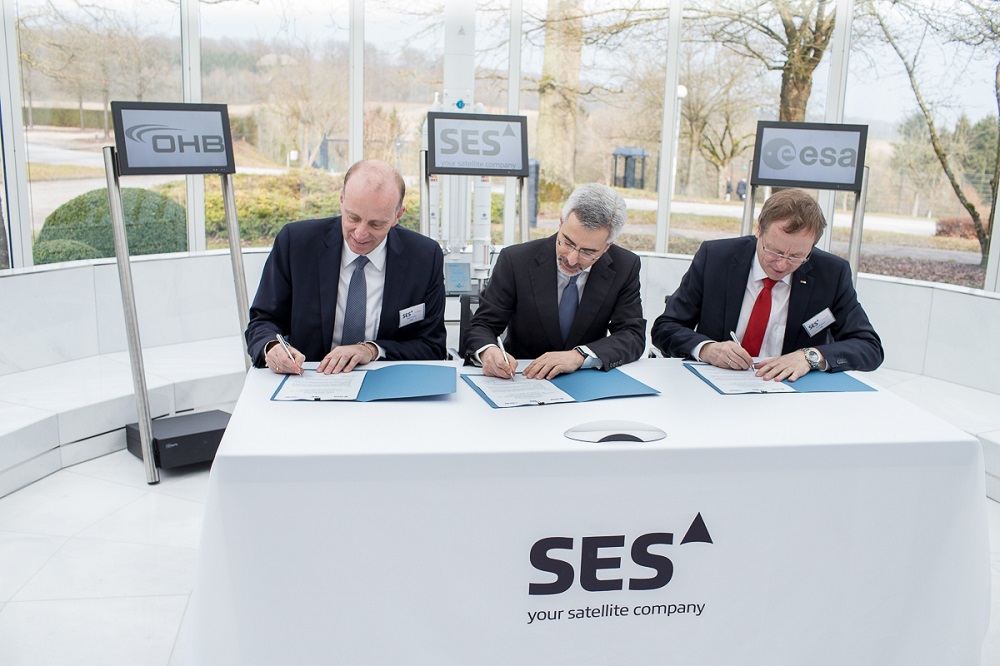 The Electra programme is based on the SmallGEO range, a European Space Agency (ESA) and German Aerospace Center (DLR) funded project with the objective to develop a general-purpose small geostationary satellite platform. The contract signed today is an element of ESA's ARTES (Advanced Research in Telecommunications Systems) programme. It calls for the development of a highly competitive generic small geostationary platform for satellite launch mass below 3 tonnes. This contract foresees the launch of an Electra satellite and its in-orbit qualification. In 2013, SES signed a first private public partnership with the ESA and OHB System AG of Bremen to support these goals.

Under ESA contract, SES will define the satellite mission and lead the procurement phase. To this end, SES will work in close cooperation with OHB System AG of Bremen, who will act as the prime contractor to SES.

“The partnership with the world’s largest satellite operator, SES, on the one hand and the support of ESA and its Member States, particularly Germany, on the other, will open up excellent possibilities for us, allowing us to assert ourselves in this attractive market,” said OHB Chief Executive Officer Marco Fuchs. “The fully electric GEO platform is a strategic product for OHB, whose importance for future contracts goes substantially beyond the telecommunications segment.”

“Electra perfectly fits into the innovation priorities of SES. Decreasing the total cost of putting a payload into orbit and increasing the range of possible applications is a key strategic element for the satellite operator community. Electric propulsion is poised to inject increased competitiveness into the satellite industry, an essential element for the sustained development of the satellite-based commercial telecommunications market. SES is pleased to trigger this Electra initiative and to establish a strong relationship with ESA," said Martin Halliwell, SES Chief Technology Officer.

“An innovative R&D investment is the key weapon for European industry to stay ahead of the intense global competition. Electra is an example of how we can achieve this,” said Magali Vaissiere, ESA Director of Telecommunications and Integrated Applications. “Our approach combines best practice gained from several years of experience, with careful customisation according to the peculiarities of each case and the needs of each partner. This is a dynamic and sustainable model for stimulating innovation, by leveraging public money to attract private investment”.

OHB System AG is one of the three leading space companies in Europe. It belongs to the listed high-tech group OHB SE (ISIN: DE0005936124, Prime Standard), where around 2,000 specialists and executives work on key european space programs. With two strong sites in Bremen and Munich and more than three decades of experience, OHB System specializes in high-tech solutions for space. These include low-orbiting and geostationary satellites for earth observation, navigation, telecommunications, science and space exploration as well as systems for human space flight, aerial reconnaissance and process control systems.

About the European Space Agency

The European Space Agency (ESA) provides Europe’s gateway to space.ESA is an intergovernmental organisation, created in 1975, with the mission to shape the development of Europe’s space capability and ensure that investment in space delivers benefits to the citizens of Europe and the world.ESA has 22 Member States: Austria, Belgium, the Czech Republic, Denmark, Estonia, Finland, France, Germany, Greece, Hungary, Ireland, Italy, Luxembourg, the Netherlands, Norway, Poland, Portugal, Romania, Spain, Sweden, Switzerland and the United Kingdom, of whom 20 are Member States of the EU.ESA has established formal cooperation with seven other Member States of the EU. Canada takes part in some ESA programmes under a Cooperation Agreement.By coordinating the financial and intellectual resources of its members, ESA can undertake programmes and activities far beyond the scope of any single European country. It is working in particular with the EU on implementing the Galileo and Copernicus programmes.ESA develops the launchers, spacecraft and ground facilities needed to keep Europe at the forefront of global space activities.Today, it develops and launches satellites for Earth observation, navigation, telecommunications and astronomy, sends probes to the far reaches of the Solar System and cooperates in the human exploration of space.

Learn more about ESA at: www.esa.int