Established in 2015, NASA TV UHD is an ambient video channel that highlights beautiful imagery from the US space program. The content leverages the latest 4K Ultra HD end-to-end video processing and delivery technologies from Harmonic. Developed in partnership with NASA, NASA TV UHD is a result of a Space Act Agreement between Harmonic and the agency’s Marshall Space Flight Center in Huntsville, Alabama. NASA TV UHD video is sourced from high-resolution images and raw video generated on the International Space Station (ISS), Hubble Space Telescope, and other current NASA missions. Programming also includes remastered footage from historical missions, shots from NASA’s development and training processes, and the channel will ultimately provide video of live launches. Leveraging the 8M pixel resolution of the Ultra HD format, the channel creates the closest possible viewing experience to actually being in space.

It was only five or six years ago that NASA began documenting major events in 4K resolution or higher, using a 6K Red Dragon digital cinema camera. The raw video files from the camera and other sources are mailed on physical discs or sent via FTP from a variety of NASA facilities to Harmonic’s post-production studio in San Jose. Here, they are stored on the Harmonic MediaGrid system, which supports an edit-in-place workflow with Final Cut Pro and other third-party editing tools. During the content processing phase, Harmonic uses Adobe After Effects to paint out dead pixels that result from the impact of cosmic radiation on camera sensors. They have built bad-pixel maps that they use in post production to remove the distracting white dots from the picture. The detail of 4K Ultra HD means that the footage also shows scratches on the windows of the ISS through which the camera is shooting, but these are left in for authenticity.

NASA TV UHD uses Blackmagic DaVinci Resolve to colour grade footage, and Maxon Cinema 4D Studio to create animations of images. The network uses Final Cut Pro X and Adobe Creative Suite to set the video to music and add text and graphics, along with the programming name, logo and branding. Final programs are then transferred in HD back to the NASA teams for review, and in Ultra HD to the SES 4K Ultra HD platform for playout to MVPDs across North America. 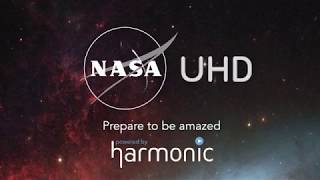