The differences between DTH and DTT


Video has become an indispensable part of our lives. Whether it is through mobile devices or televisions, people are engaging more with video content than ever before. Yet, despite its importance to business and consumer growth, not many really understand how distribution methods for video content work. What really is the difference between direct to home (DTH) and digital terrestrial television (DTT) and why should you care?

These are the two most common distribution methods used in Africa, a continent that is receiving significant interest as an investment destination from around the world. Considering that more than 1.2 billion people across 54 countries live here, there is no denying the potential for growth across industry sectors. This is especially true in communications infrastructure where it is not always possible to roll out physical cables especially to remote and rural areas.

In addition to superior audio and video quality, one of the most significant advantages of digital distribution methods like DTH and DTT over analogue is the ability to compress signals over channels, thereby releasing valuable spectrum that can be used for other services.

The figure below provides an overview of what the video distribution landscape looks like and serves to illustrate the complexity associated with delivering effective video services. 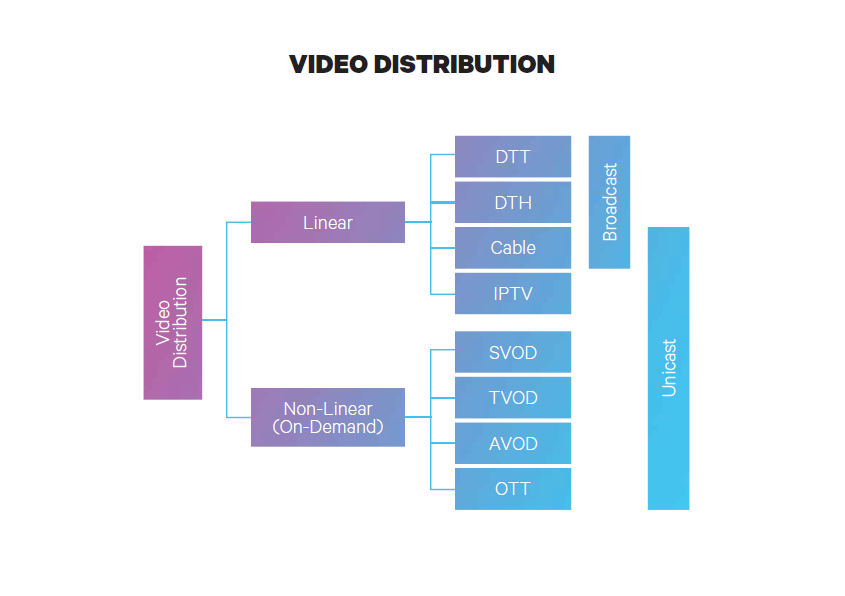 What is digital satellite television?

Digital satellite television consists of a network of satellites that broadcast digital data. The television signals are delivered by means of communications satellites and received by satellite dishes and set-top boxes. It provides users with a range of channels and services, often to areas that are not serviced by terrestrial or cable providers.

Satellite television, like other communications relayed by satellite, starts with a transmitting antenna located at an uplink facility which has very large uplink satellite dishes, as much as 9 to 12 metres. These dishes are pointed towards a specific satellite with the uplinked signals transmitted within a specific frequency range. This enables a transponder tuned to the frequency on board the satellite to receive the signal and ‘retransmit’ it back to earth at a different frequency band to avoid interference. From a technical perspective this is typically done in the C-band (4-8GHz) or the Ku-band (12-18GHz) or both.

The satellite receiver (such as the ones found  within homes) demodulates and converts the signals to the desired form such as audio (music), video (television), data (internet access), and so on. The coverage area of such a DTH network is determined by the footprint of the specific satellite being used. Fortunately, this is typically large enough to cover significant parts of continents or regions.

The below illustration outlines a typical DTH satellite transmission: 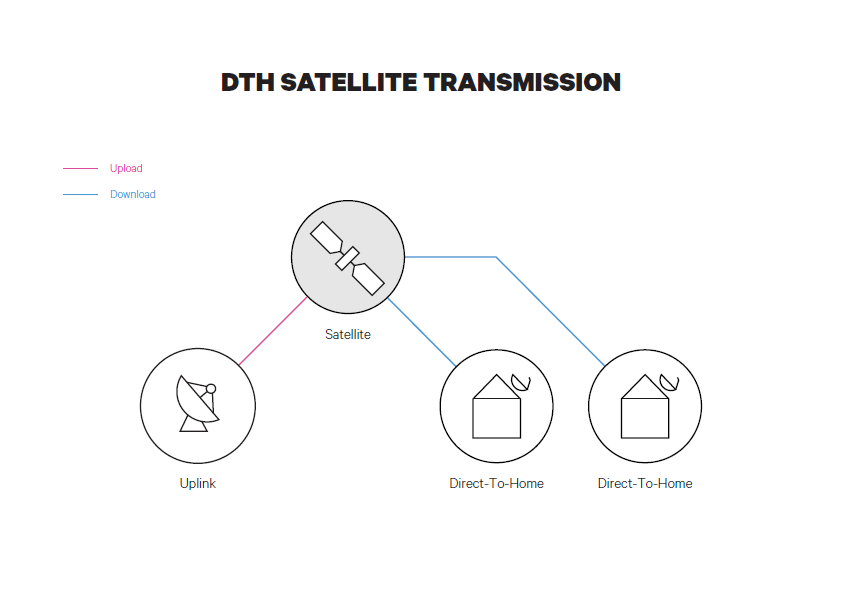 With DTH services, customers can view and listen to content in high definition and are even able to customise their bouquet of services from the provider. While the level of customisation is dependent on the satellite TV provider, it does offer a level of flexibility unheard of in the analogue world which was very much a case of ‘force-feeding’ content to customers.

DTT utilises conventional antennas (or aerials) instead of satellite dishes or cable connections to deliver video and audio services to customers. While the transmission of radio frequencies through airwaves is like analogue television, the biggest difference is that the multiplex transmitters enable the reception of multiple channels on a single frequency range.

DTT is received via a digital set-top box, or integrated receiving device, that decodes the signal received via a standard aerial antenna. This is the area that has attracted the most controversy especially in numerous African countries still migrating to a DTT broadcast environment. The intention is for DTT to replace analogue transmissions, but cynics argue that the cost of set-top boxes make it impractical for all people to access. Even though governments are subsidising these costs, the slow migration to DTT across the continent remains a cause for concern.

Unlike satellites, DTT networks comprise of several terrestrial transmitters each covering an area of approximately 80 to 120km radius from the transmitter. The actual coverage area is influenced by the power of the transmitter (which is often limited to minimise interference, the height of the transmitter, and the terrain or other physical obstacles). 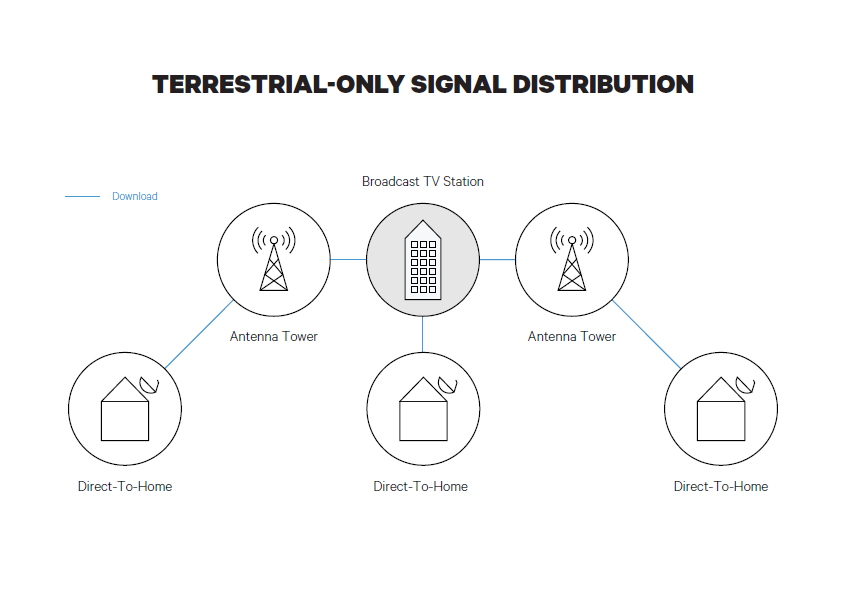 The above illustration shows a typical terrestrial only signal distribution:

With recent research indicating that there will be 75 million digital homes by 2021, satellite and terrestrial infrastructure should provide the ideal platforms for the transition to DTT. As of June 2014, 19 countries in Africa have launched national DTT migration projects so there are still significant opportunities to be had in the race to embrace digital.

Looking beyond the political debate around the roll-out of digital services, there are significant benefits to be had, for broadcasters embracing this [digital] environment.

Further research indicates that digital provides the foundation for new, more dynamic content strategies. Accenture has found that a number of broadcasters have made a strategic shift to content production, generation revenue from international licensing deals and syndication rights.

Additionally, more broadcasters are increasing their investments in DTH offerings as they seek to reach new markets and expand on business growth. Even better, this investment is not reliant on television adoption but speaks to the growth of mobile devices being used for content consumption. It is no longer a case of doing the one at the expense of the other. Rather, it is about embracing all platforms to push digital content to consumers irrespective of their location.

Just as with most technological opportunities, DTH and DTT can work together in a hybrid model providing broadcasters with the opportunity to draw on the best of both worlds. It means they will be able to get the best benefits from using the respective platforms in the most advantageous way possible, while deploying a digital broadcast network.

The illustration below shows how a hybrid network provides opportunities for additional business growth:

Similar to how hybrid cloud computing adoptions implement public and private elements, so too will hybrid digital installations take the most operator-relevant aspects of DTH and DTT. A truly bespoke solution can be developed with the right satellite partners that offer the experience necessary not only in the continent but regarding global markets as well.

SES Africa has been investing in and helping develop the market on the continent for almost two decades. We have offices in South Africa, Ghana, Nigeria, and Ethiopia providing an extensive footprint capable of supporting your operations anywhere on the continent. In addition, through our Elevate training programme, we are equipping installers across Africa with the skills needed to ensure quality installations. SES Africa offers complimentary consultation services to broadcasters to identify the digital solutions best suited to their unique requirements.

For more information or to book a meeting with one of our specialists contact us today.

Together with Burkina Faso Government we have embarked on an ambitious project to extend and improve the countrywide ICT network and enable the Burkinabè population access to key e-applications. Industry Government  Location Burkina Faso